Where Would We Be Without Mom? Celebrate Mother's Day

Give a gift of hand painted glassware


mothersday 2019 from Susan Rehm on Vimeo. 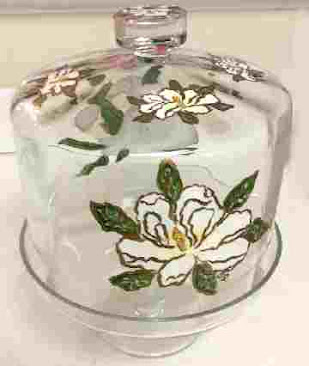 Our beautiful cake plate with dome great for entertaining large parties or for smaller gatherings of family and friends. Perfect gift for weddings and anniversaries.

Mother's Day
There is one relationship that is recognized and celebrated all over the world and it is undeniably the most revered among all others and that is the bond between mother and her family.

Nowhere is one person most honored for her love, devotion, and commitment than it is no wonder that a special day has been set aside just for her, especially in this male-dominated world.

The celebration of Mother has taken place since the early Greeks and Romans who held festivals for the mother goddesses Rhea and Cybele. Then the Christian festival in our day of the United Kingdom and Europe became "Mothering Sunday" and fell on the fourth Sunday in Lent when the faithful returned to the mother Church.

The origins of Mother's Day started in the United States before the Civil War in the 19th century, Ann Reeves Jarvis of West Virginia started Mother's Day Women's Clubs to show women how to care for their babies and young children.

In 1870an abolitionist and suffragette, Julia Ward Howe wrote the “Mother’s Day Proclamation,” a call to action that asked mothers to unite in promoting world peace.

In May 1908 Ann Reeves Jarvis organized the first official Mother’s Day celebration at a Methodist church in West Virginia in paying tribute to her own mother. She started a massive letter-writing campaign all over the United States to make mother's day a national holiday. She got her wish when Woodrow Wilson declared in 1914 Mother's Day a national holiday.

But it was not long after that florists and card companies began to commercialize it that Ms. Jarvis spoke out against it with charities, women's groups and lobbied with the government to have it removed from the calendar.

Down through the years, Mother's Day has been a time for women rights activists to use to launch their own causes for and against women such as Coretta Scott King, wife of Martin Luther King who used Mother's Day to support a march in 1970 for underprivileged women and children.

Posted by Clearly Susan at 5:27 PM No comments:


The wine connoisseur who is an expert in all the finer things of life knows a thing or two about what embodies the full flavor of a good bottle of wine. He or she should as they study what is the age-old process of those beautiful Sunkist grapes to make a savory taste for your palate taste so good.

So as more and more savory adults drink vino not only for the taste but, also for health benefits then why would you drink this delectable fruit in anything but the finest of glassware. A wonderful trend if you are into that sort of thing is to have a collection of custom wine glasses painted in a variety of exquisite designs to please the most discerning tastes.

There are wine glasses with flowers and vegetables for the garden lover who loves anything that grows. The traveler will delight in our French wine glasses painted of various architectural highlights like St. Michael and St. Malo and the French countryside. Clearly Susan can’t leave out the animal lover as she will paint your favorite dog or cat, pig, goat, iguana on any type of glassware imaginable.

Here is where the true beauty lies in our pieces, the uniqueness of our designs and the rarity of our glassware.

Don’t take our word for it take a look for yourself and you will be amazed at the various choices you will have. Your decision won’t be in whether to buy our wine glasses, but which one!
Posted by Clearly Susan at 7:06 PM No comments: