NEWS FLASH!!!! Clearly Susan will launch a new website for hand painted glassware  with a sleeker design showcasing custom painted glassware in the next few days. We are so excited....The new site will be sleeker, faster, easier to get around and best of all Mobile Friendly for all you Ipad's and Mobile users who love to shop from your devices. It is the only way to go! Stay tuned.....here is a sneak peek. Still continue to order on our present site, but keep checking back as you will be really surprised! 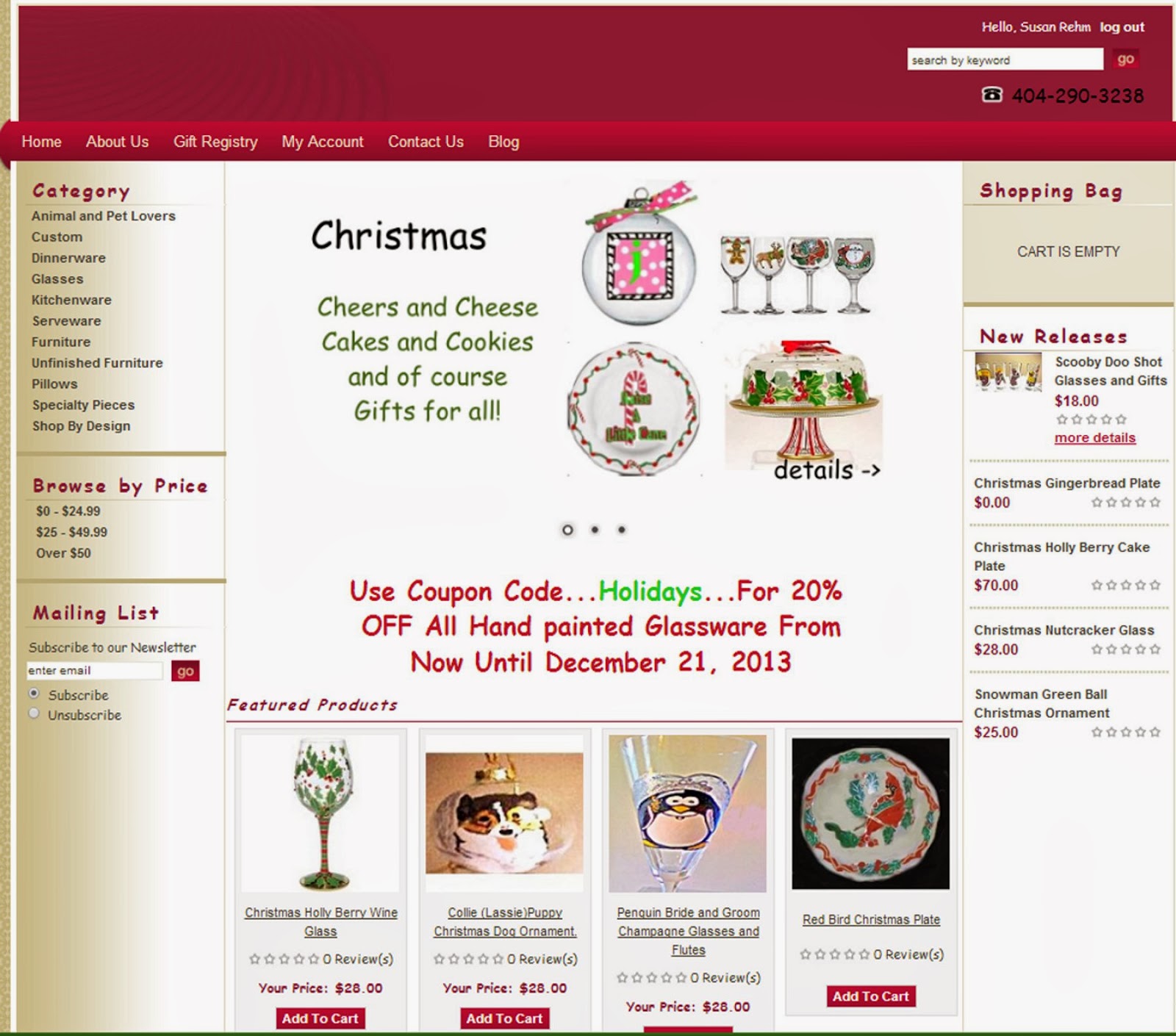 Posted by Clearly Susan at 7:07 PM No comments:

What Christmas Gifts Do You Want Clearly Susan To Bring To You?


20 Percent Off All Hand painted Christmas Gifts at Clearly Susan


Order Now To Receive In Plenty Of Time For Christmas 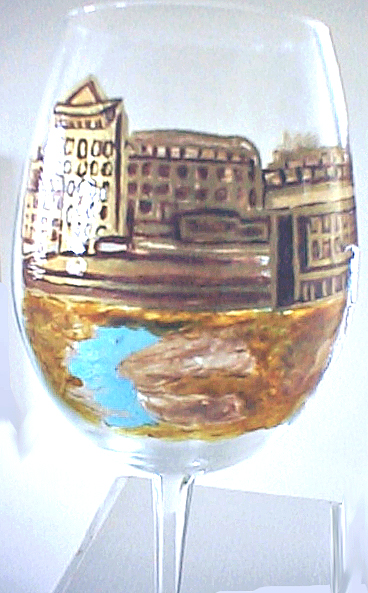 This is St. Malo in France which was specifically requested by a customer for her boss. She gave me pictures of different attractions in France that he loved and these is one of the set. Saint Malo is one of the most popular tourist attractions on the northern coast of France. It is a walled city with a long and varied history going back to at least Roman times. The other wine glass is the coastline of the South of France.

These are examples of a wine glass that you can win in which you request the design.

.
Win A Custom Hand painted Wine Glass.....$25 Value With A Design Of Your Choice. Enter To Win By Clicking On Our  Facebook App Below .
We Are Trying To Expand Our Social Reach. All You Have To Do Is "Like" Our Facebook Page, Give Us A Tweet, Or Make A Comment On Our Blog. Must Be Done Through The App To Get Credit. Giveaway Runs From June 24 Through July 17, 2013. You Can Enter As Many Times As You Want. Winner Will Be Notified By Email And Announced On Our Social Networks And Our Blog.

Thank You For Your Interest In Clearly Susan Hand painted glassware And Unusual Gift Items. If You Have Any Questions, Please, Contact Me Directly clearlysusan@mindspring.com.

a Rafflecopter giveaway
Posted by Clearly Susan at 12:08 AM 1 comment:


Utilize Our Hand painted Plates, Glasses, Cups and Saucers At Your Next Dinner Party

Dinner Party Etiquette......Who knew that there was still such a thing! Please, didn't that go out in the 60's or at least the 70's? Well, I know for a fact that it didn't in the true South as it is the Southern way to have good manners, mind your P's and Q's and for heaven sake set a nice table.

Well, I must confess I am joking about does Dinner Party Etiquette still exist. Yes, it does, but what is so delightful is that now days you can set your table with a hodge podge of plates and crystal and it will turn out beautiful. I love the fact that you don't have to have matching plates, glasses, etc. Anything goes.....it is all left to your imagination. Now you can express your own true style which is what it should be.

Anyway....thought you might like this article "Dinner Party Etiquette What You Should Know About It". It has some blast from the past on how vintage dinner parties were once conducted written by Emily Post in 1922(The Queen of Etiquette, and I say that reverently).

Now remember, I advise everyone to do exactly what they want to do and be as creative as possible with your parties. It is your party so you handle it the way you think is best. Also, check out their resources tabs on the left for recipes, what kind of drinks to serve and even centerpieces. Be sure to dig deep as there are some real resource goodies inside.

I have included some items that we offer that might spruce up a luncheon or even a summer dinner party.

Posted by Clearly Susan at 9:38 PM No comments:

Tophatter is a virtual auction house.

Every day, buyers and sellers from all over the world gather for live auctions that are fun, fast, and feature fabulous items at exclusive prices.


Clearly Susan  thought this was interesting....really into the graphics. Go in and take a look and leave us a message on what you thought about the concept of Virtual Auction Houses...
Posted by Clearly Susan at 9:29 PM No comments:

School Is Out For Summer....Give Hand painted Teacher Wine Glasses

Posted by Clearly Susan at 11:30 AM No comments:


We are updating  Clearly Susan's Facebook Page and we would love for you to  "like us"  and let us know what you think..Follow us and see the latest

Promote Your Page
Posted by Clearly Susan at 6:26 PM No comments:

These butterflies hand painted on wine glasses of your choice are fluttering through the air just whispering "catch me if you can". Hand painted in vibrant colors of majestic green, blue, purples and fuchsia etched in gold these glasses are truly a one of a kind design.

Posted by Clearly Susan at 5:46 PM No comments:

Posted by Clearly Susan at 5:11 PM No comments: 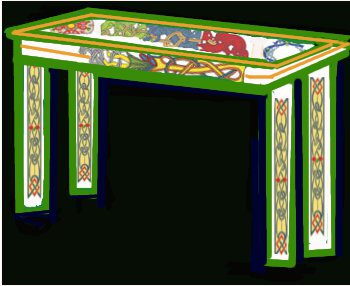 Clearly Susan is proud to offer hand painted furniture for every room of the home or office. We have kitchen stools and bar stools, chests and trunks, end tables, sofa tables small writing desks, chairs and so much more.

We create custom furniture of your choice from unfinished wood furniture. If you want a particular piece that we do not have we can send you picture samples and try to find the furniture piece you want. We next will order the solid wood furniture from our vendors and begin the process.

We prime the wood with a base coat and then paint with a color of your choice. We can stress the wood to make it look old, use a faux finish, glaze what ever you like, and then we paint the furniture with your design. After that we paint it with a sealer. It is that easy. 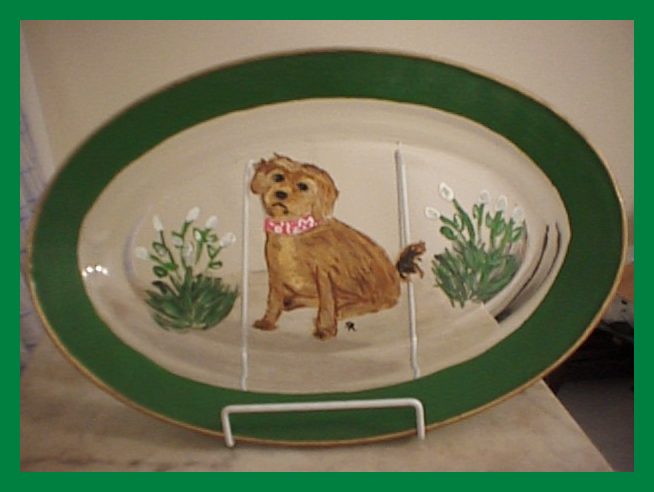 Have your favorite furry friend hand painted on a plate or platter, wine glasses or ornaments. Just email us a picture so that we can get the exact details of your beloved pet. We would love to hear from you as we love animals, too, and what better way to preserve their picture forever then to have them hand painted on a plate or platter. We have such a loving relationship with man's best friend. A painted dog and cat plate and platter is a wonderful gift to give to someone.

Posted by Clearly Susan at 11:50 AM No comments: